Hear from a Peer: How Administrative Professionals Protect Their Time

Your fellow administrative professionals share how they respond when last-minute asks threaten to derail their workday.

As an administrative professional, fielding “urgent” requests is all in a day’s work. But when those requests are unreasonable or would completely upend your schedule, it may be time to put your foot down. We asked members of the Staples InsidersNetwork how they’ve successfully pushed back in these situations.

Becky, administrative assistant: “I have politely reminded people to give at least 24 hours’ notice for breakfast or lunch requests.”

Handling meal orders is a routine part of Becky’s job. But when a request is made last-minute, it can throw her day out of whack. Because Becky’s company is in a remote, rural area, many restaurants won’t deliver, and it can take her an hour to pick up the food.

“I’ve had people ask me to order lunch an hour before they need it,” she says. “If I happened to have lunch plans myself or work that I needed to do in that time, it would throw everything off. Not only that, but some restaurants can’t even accommodate last-minute requests for large groups.”

To keep her workdays more predictable and help ensure food orders can be filled, Becky has asked that breakfast or lunch requests be made at least a day in advance. For the most part, her co-workers comply. When urgent situations come up, she does her best to accommodate them. “Sometimes customers come in unannounced and a colleague will want to order lunch,” she says. “If I’m absolutely unable to pick up a meal, I’ll say that I can order it for them, but that someone else on their team will need to go out for it.”

Steven, media specialist: “A colleague missed a deadline by more than a week. I had to hold firm when he asked me to make up the time.”

Steven is responsible for gathering copy for newsletters that his colleagues send to donors and other supporters of their organization. Steven edits, formats and submits the newsletters to the printer. Pulling this off requires a strict adherence to deadlines. During a particularly busy season last year, one of his colleagues submitted copy more than a week late.

“Sometimes I can sneak things in even if they’re late, but with all that was going on at that time, it was impossible,” Steven recalls. “I mentioned to my colleague that I would get his copy out with the next batch, which would be going out a few weeks later. He was unhappy. I had to remind him that he was late in getting it to me.”

The colleague repeatedly asked Steven about the timing, hoping for a different answer each time. Yet Steven held firm. “If we were to send the newsletters to the printer individually, it would be much more expensive than sending them in a large batch,” he says. “That’s why the deadlines are important.”

Ashley, administrative specialist: “When someone in my office was trying to pawn off their workload onto me, I spoke with my supervisor about an action plan.”

Ashley is accustomed to handling tasks that no one else wants: changing printer ink, playing backup receptionist, even scheduling oil changes. But when a colleague started forwarding voicemails to her that the co-worker was better equipped to handle, she had to draw the line.

“I worked out a plan with my supervisor so that when calls or voicemails came in that were more relevant to my colleague’s role, I would forward them back to her,” Ashley says. “I also talked with that colleague, and things have been much better since. It was helpful to review our responsibilities.”

The experience has made Ashley more comfortable with setting boundaries. Now, when she is asked to take on a task that is outside the scope of her role, she does a quick evaluation of what’s needed and what she can offer. “If it’s something I'd be best completing, fine. But if it’s something one of our volunteers or reception staff can manage, I let them take care of it. I have proven that my skills and abilities are needed and that my time is valuable.”

We asked members of the Staples InsidersNetwork to tell us: How do you handle last-minute or unexpected requests when your plate is already full? 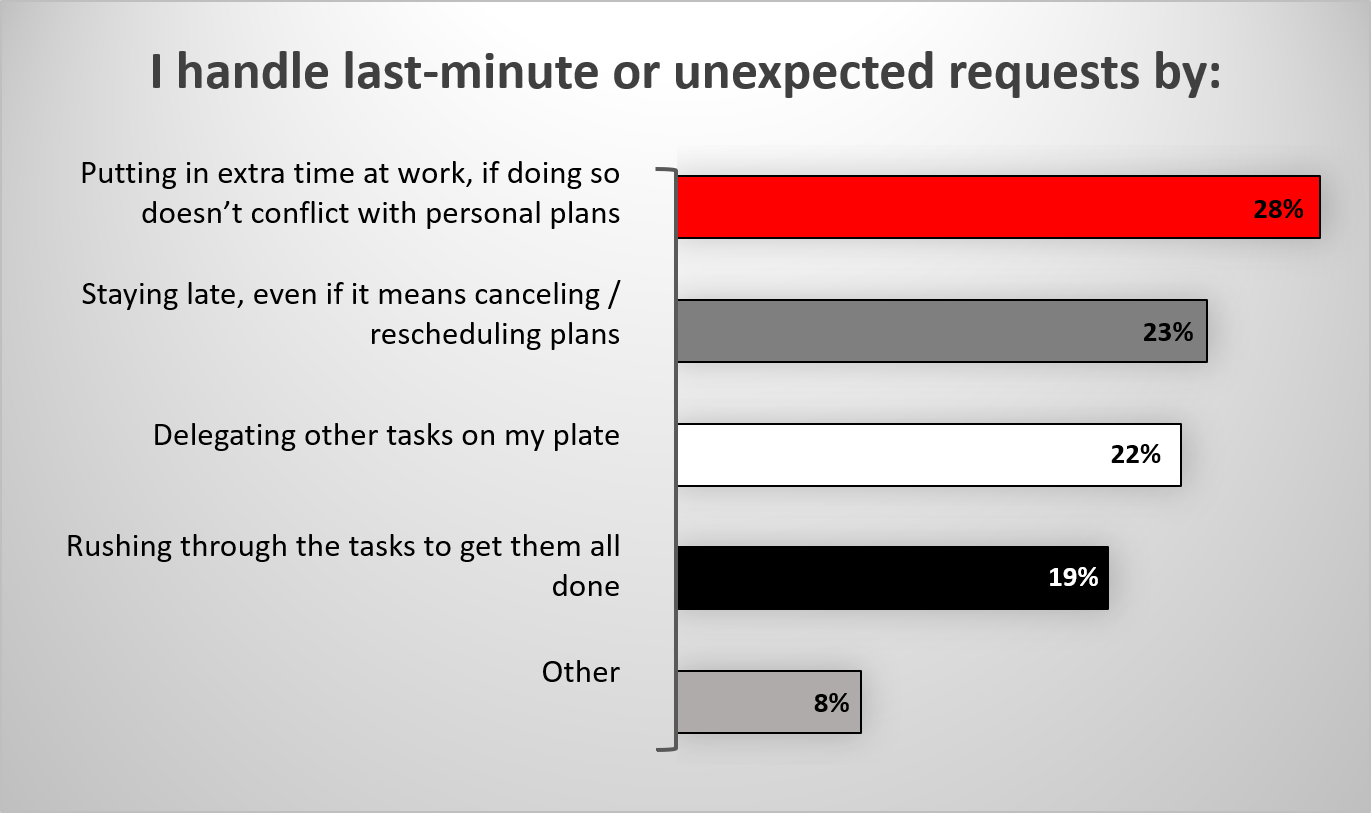 Caption: Administrative professionals do what it takes to get the job done —though some draw the line when personal plans are at stake.