The Evolution of the Classroom

Classrooms today look vastly different from our own school days — and the current generation’s classrooms are even more futuristic. Discover how the classroom has evolved to meet the needs of each generation.

Rows of desks, chalkboards, and overhead projectors: these tend to come to mind when we imagine a school classroom. These fundamental elements of education are still there today, but they look a little different with each passing decade. Helped along by the power of technology, classrooms are constantly changing. Decades ago, they looked vastly different from our own school days — and the current generation’s classrooms are even more futuristic.

The evolution of education can be attributed to changing technology, social trends, world events, and continuing research into the ways humans best learn. Over the last four decades, K-12 education has progressed so much that a 1980s classroom might seem impractical compared to classrooms of today. Here, we’ll explore how education has changed over time, and how it’s continuing to evolve.

Reaganomics, the fall of the Berlin wall, the wedding of Prince Charles and Lady Diana Spencer, blockbuster films, and the emergence of computer technology made the 1980s a decade like no other. The same can be said of the classroom, where students’ education was supplemented with computer literacy lessons — and precious time to play The Oregon Trail.

Students carried Trapper Keepers to organize their notes and homework and tried their best to emulate musicians they saw on the brand-new channel MTV. Not to be outdone by Michael Jackson or Madonna, emerging computer use made the biggest impact on the 1980s classroom. 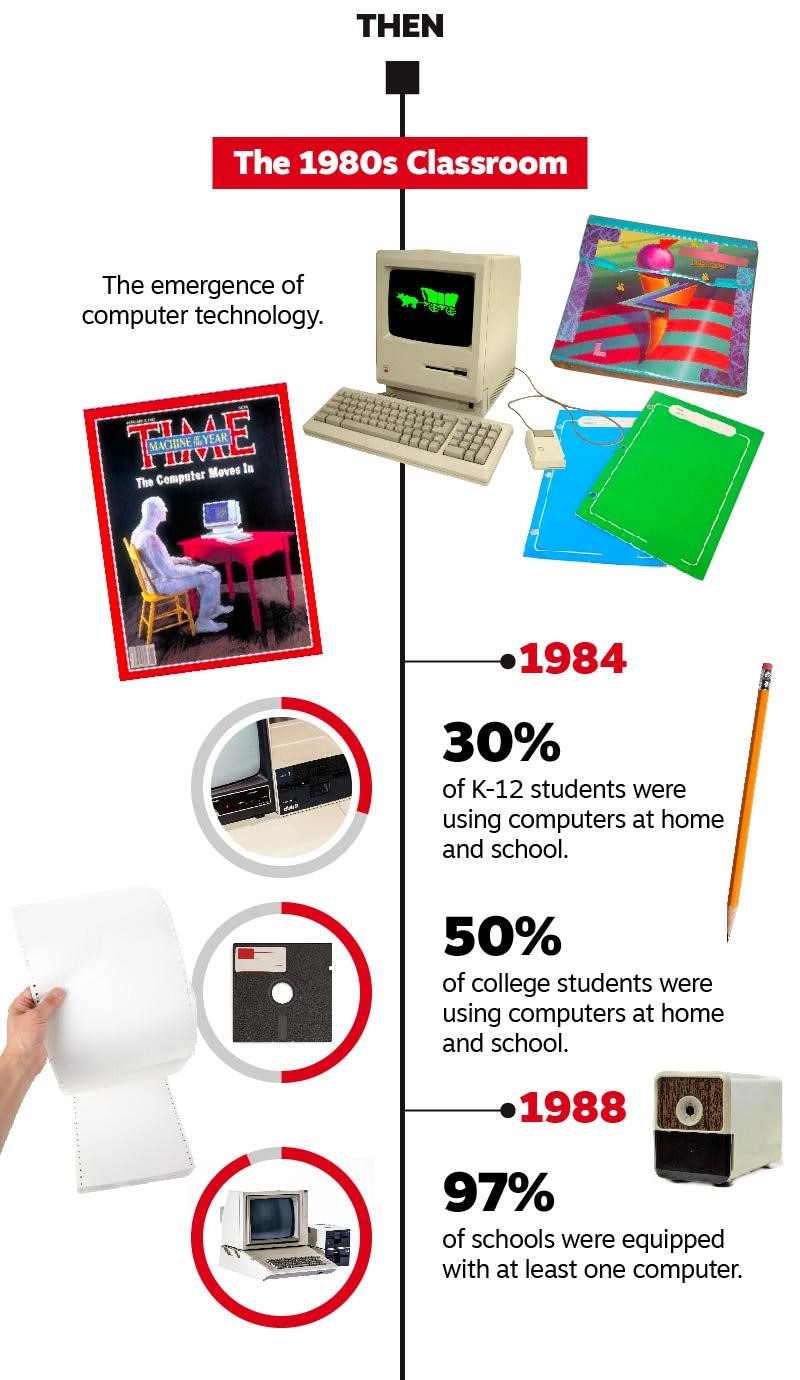 The Computer Enters the Classroom

By the late 1970s and early 1980s, computers were becoming more and more widely used in business settings. In fact, Time Magazine named the computer its 1982 “machine of the year.” And as schools have always aimed to teach marketable job skills, computers were introduced to classrooms around the world — not just to increase computer literacy among students, but also to aid teachers in instruction.

The Apple II computer and other personal computers (PCs) became popular in classrooms, as they were conducive to the teacher-student classroom learning environment. By 1984, roughly 30% of K-12 students were using computers at both home and school, while 50% of college students did the same. By 1988, 97% of schools were equipped with at least one computer. These impactful technological changes were just the beginning.

Often considered the best decade — depending on who you ask — the 1990s were full of some of culture’s greatest hits, from Seinfeld and Nirvana to Titanic and The Sopranos. Michael Jordan retired twice, Britney Spears was topping the charts, and homes were filled with Beanie Babies collections.

This decade also saw the emergence of influential classroom technology — and that’s not including Tamagotchis. The height of educational technology at the time included CD-ROMS, Windows 98, Microsoft PowerPoint, Floppy Disks, and the first TI-80 Graphing Calculator. But the one technological advancement that changed education forever? The internet. 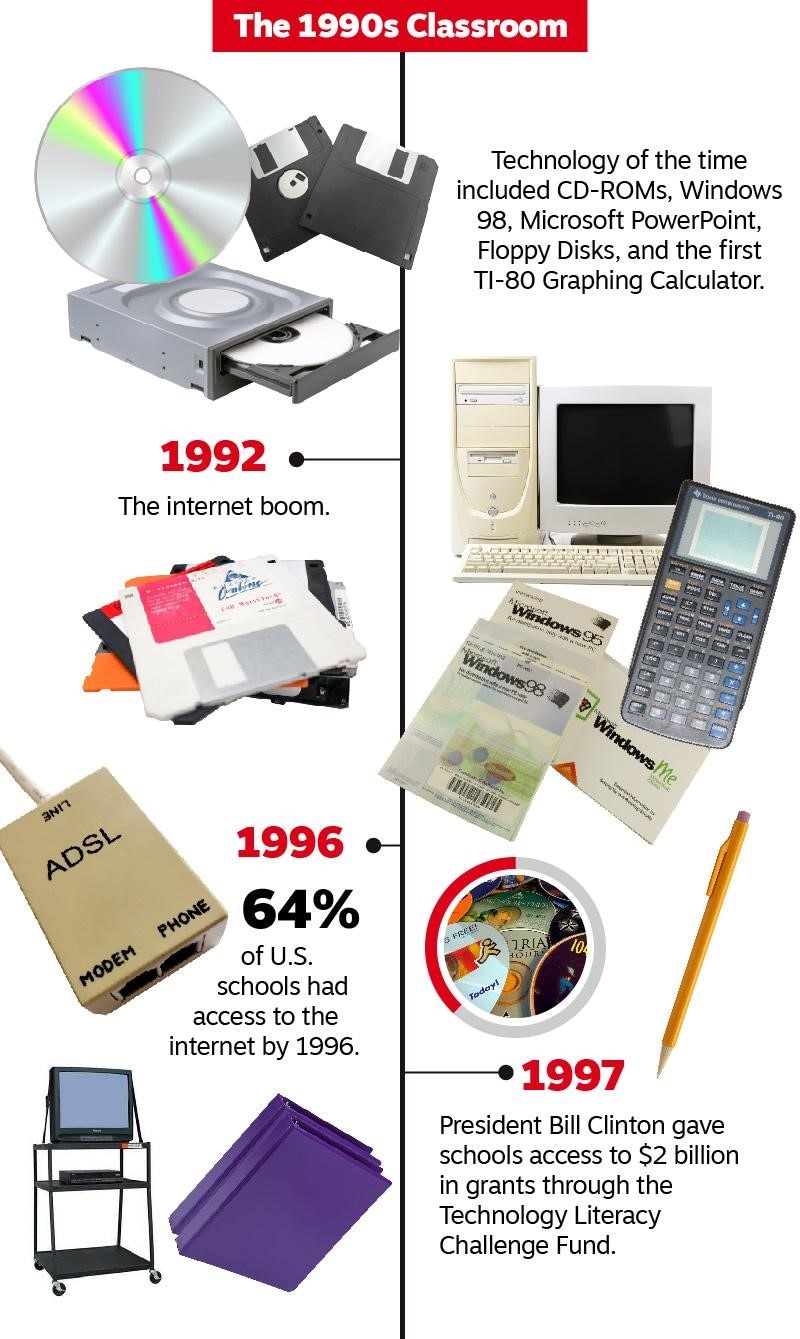 By 1992, high school enrollment was at an all-time high of 95%. Teachers needed new, more accessible methods of instruction and teaching, while students needed new ways to learn, study, and communicate. Cue the internet boom.

By the mid-1990s, the internet was taking off much faster than anyone could have imagined, and by 1996, 64% of United States schools had access to the internet. In 1997, President Bill Clinton gave schools $2 billion in grants through the Technology Literacy Challenge Fund, which encouraged them to provide every student access to computers and the internet. Businesses and schools began creating web pages and buildings were wired for internet access. Some schools even installed web servers and began using education software.

The 2000s was a period of rapid cultural and economical changes. These cultural shifts were accelerated by groundbreaking technological advancements including Myspace, YouTube, Facebook, the iPod, Skype, Google, and Wikipedia, to name a few. These technologies quickly made their way into U.S. schools, as did “emo” music, low-rise jeans, flip phones, and the Harry Potter craze. 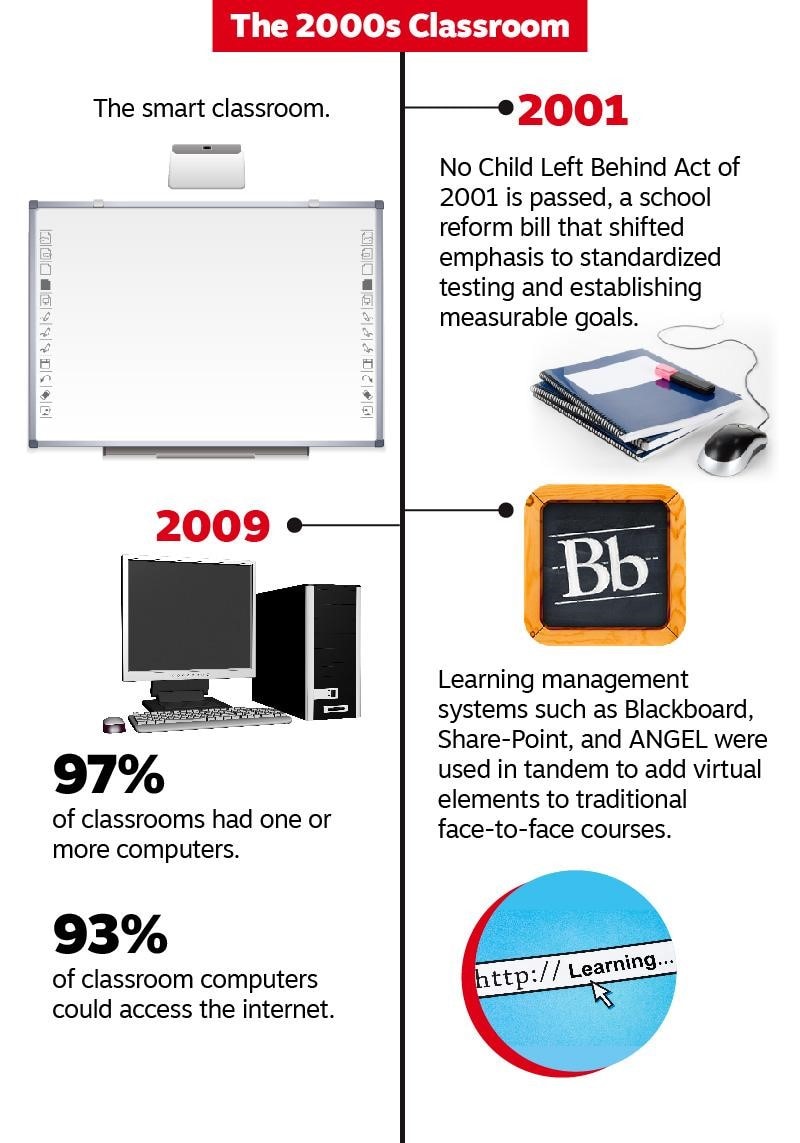 Another change that made its way into schools was the No Child Left Behind Act of 2001, a school reform bill that shifted emphasis to standardized testing and establishing measurable goals. This decade also saw the arrival of smart and portable technology, which did away with traditional items including blackboards and overhead projectors.

Classrooms kept up with technological advances in their own right with the smart classroom. This decade saw the first iterations of the smart white board, which were designed to encourage student engagement and participation. These internet-enabled, interactive white boards replaced traditional white boards, DVD players, and TVs, making them incredibly valuable as teaching aids. Learning management systems such as Blackboard, Share-Point, and ANGEL were used in tandem to add virtual elements to traditional face-to-face courses.

By 2009, 97% of classrooms had at least one computer, and 93% of classroom computers could access the internet. Distance learning, where classes were conducted over the internet, became increasingly popular. However, schools encountered limitations, including the misuse of technology, poor quality of instructors, and problems with equipment. Still, the smart classroom trend continues today and teachers and schools have learned to iron out the kinks.

Beginning amid a financial recession and ending at the dawn of a global pandemic, the 2010s were years of transformation that played out before our eyes. From viral dance challenges and memes to social justice hashtags and Pokémon Go, this decade launched a culture of interacting with the world through our smartphones. Schools had to learn how to educate students who were accustomed to binge-watching Netflix one second, then Instagramming avocado toast the next.

For many educators, that meant reaching students on their level. From 2015–2016, about half of U.S. students were issued their own smart devices, such as laptops or tablets, for schoolwork use. Outdated educational tools were swapped with advanced technology. Even more classrooms opted for interactive smart whiteboards. The traditional classroom overhead projectors used in schools were swapped for wireless LCD projectors. But with more in-class tech usage, one concern abounded: how to ensure healthy screen time.

For the first time, schools were educating students who had no memory of life without the internet — or even without smartphones and social media. This meant that even kindergarteners were skilled in computer literacy, and schools needed to create more progressive learning environments.

By 2019, 99% of schools had access to high-speed fiber-optic internet, and 96% of school leaders felt that digital learning had a positive impact on both instructors and students. However, almost three-quarters of teachers worried that students were spending too much time in front of screens. Balancing healthy screen time with digital and distance learning will surely continue to be a challenge for schools and educators around the world.

Classrooms of today are filled with students who grew up with high-speed computers and internet access everywhere. In seconds, they navigate TikTok, Instagram, and Snapchat, making educational technology of the past seem laughably antiquated. However, the biggest educational challenges were realized in the wake of the COVID-19 pandemic. 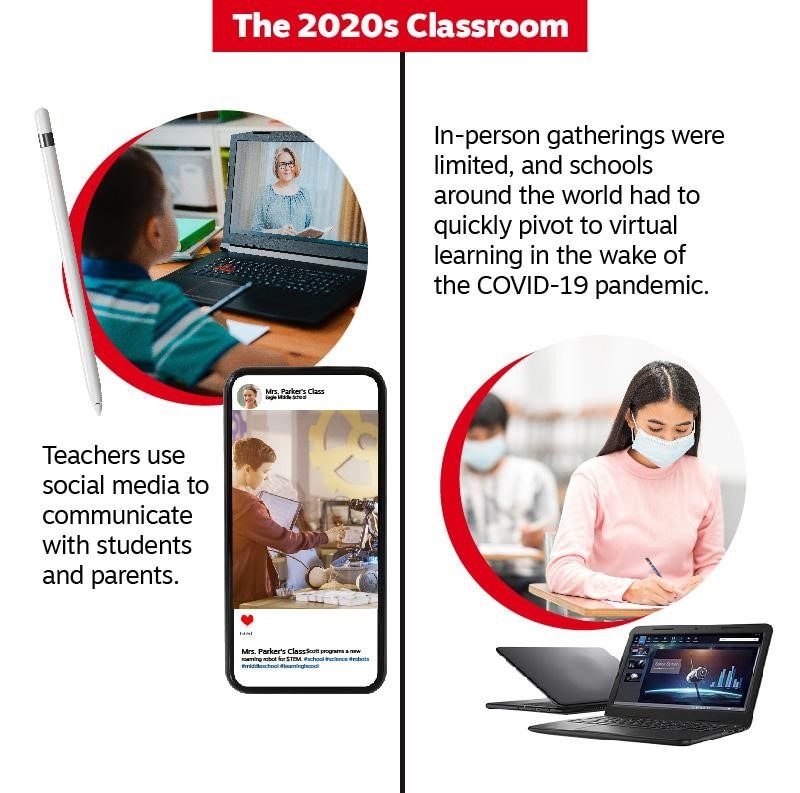 In-person gatherings were limited, and schools around the world had to quickly pivot to virtual learning. Most college students were already familiar with online courses, but even kindergarteners now had to sit still during Zoom video classes. Schools distributed laptops and tablets to their students, and parents made sure their children had access to reliable internet connections. This challenging period had an undeniable impact on classrooms, and will continue to shape the future of education. Another factor that will continue to transform classrooms of today is learning through social media.

Social Media in the Classroom

Perhaps the biggest difference students and educators will see compared to decades ago is the idea of instant connection and communication. It’s been almost 15 years since pioneering social site MySpace made its debut, and social media is now a part of our world like never before. It’s even made its mark on the classroom.

What’s Next for the Classroom?

The classroom has come a long way since the 1980s. Instead of first-generation PCs, students now navigate their learning through handheld, lightning-fast tablets. Instead of cramming their papers in a Trapper Keeper, they organize digital files on personal laptops. And with educational technology showing no signs of slowing down anytime soon, what can students and educators expect to see in the classrooms of tomorrow? 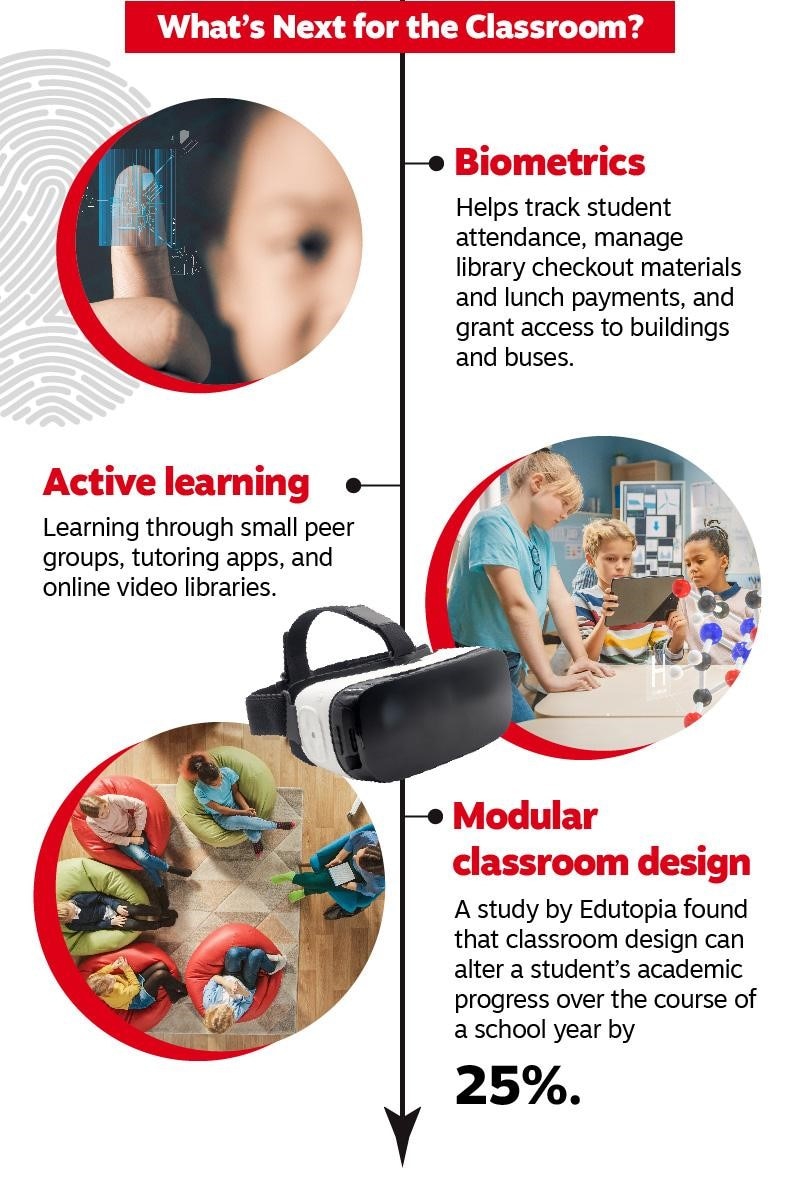 We don’t know exactly what the classrooms of the future will look like. But if the past four decades are any indication, exciting changes are to be expected.