Hear from a Peer: How to Play Office Mediator

Learn how your fellow administrative professionals handle these interpersonal dust-ups.

When you’re tasked with keeping the office running smoothly, there may be times when you need to smooth the feathers of various team members. Interpersonal disputes are part of even the smoothest-running office, so acquiring some conflict-resolution skills can help significantly when things start to go off track.

Robert, accounts payable supervisor: “I’ve found that giving both parties in a conflict the opportunity to say their piece resolves most conflicts.”

Misinterpretation is at the center of many workplace conflicts and can drive a wedge between colleagues. Having a neutral party bridge the gap between what was said and what was meant can often clear up the problem. “I might have to restate what one person says to make sure that their intent is clear to the other person,” Robert says.

On rare occasions, settling disputes takes more work. “Sometimes, it’s a personality clash, or someone dislikes someone else,” he says. Those situations require a heart-to-heart with the instigator, Roberts explains. “Usually they are not fully aware of the role they’ve played in the conflict. By pointing it out, you are on the path to sorting it out.” 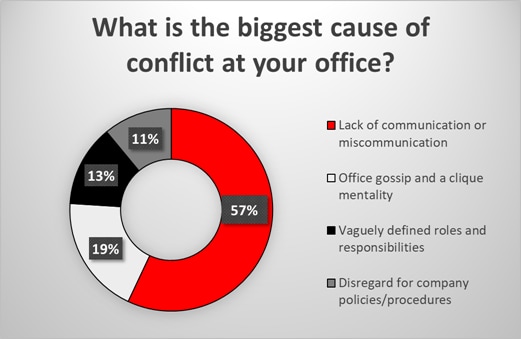 Lack of communication and misunderstandings are far and away the greatest sources of conflict between staff members, according to those polled. Emphasizing clear communication could help to ease the problem.

Jamie, front desk coordinator: “I encourage people to give each other the benefit of the doubt.”

Stepping outside of your own perspective is sometimes required to settle differences. When his colleagues are at odds, Jamie urges them to try to “walk in the other person’s shoes.” One instance of this happened at a previous job, where a co-worker and a supervisor disagreed over processes and who was to blame.

“They were both stuck in their own perspective and focused on each other’s faults,” he recalls. The supervisor questioned the employee’s performance, while the employee blamed the supervisor for lack of support. “I encouraged them to think about the challenges the other was facing, and why they had made some of the decisions they had made. For example, the employee was new to their position, and that may have shaped their perception of things.”

Carolyn, administrative assistant: “I remind my colleagues that emails can be easily misunderstood.”

The true intention of an email can sometimes be hard to decipher, and problems can ensue if assumptions go unchecked. Carolyn, who works at a law firm, discovered this firsthand when she received an email from an attorney that read in part: “I have to believe there is a better way to do this.” Carolyn took this as a judgment of her work performance — specifically, that she was not being efficient or cost-effective.

“When I actually spoke with him about it, it was clear he was just musing aloud whether there was a better software application to create a product that he needed,” she said. “The way I perceived his message wasn’t what he had intended.” Carolyn has used this experience to encourage colleagues to talk face-to-face when interpersonal troubles erupts.